The SouthCoast Community Foundation is proud to offer scholarship opportunities to students in our community. We manage the largest scholarship program in our area, with more than $400k awarded to local students each year.

Scholarships: How to Apply

Applications will be accepted for two months starting, January 1st, 2021.

STEP 1: Determine if you are eligible.

Review the 2021 Scholarship Opportunities Packet. This packet contains eligibility requirements for scholarship funds administered by the SouthCoast Community Foundation. We strongly encourage you to go through this booklet prior to beginning an application to gauge your eligibility.

Each question on the quiz is designed to gauge your eligibility for each of our unique scholarship opportunities. After submitting the quiz, you will be re-directed to a results page with a listing of all of the scholarships for which you are eligible to apply. Click on the small box next to each scholarship you would like to apply for and then click on the button at the bottom of your screen to add the scholarships to your virtual bin and to create an applicant account.

While the deadline for most scholarships is March 1st, some vary. Incomplete applications and/or late applications, including late attachments, will not be accepted.

The specific materials needed for each scholarship are detailed in the online application. IN GENERAL, you should be prepared to submit:

Have a question about the financial aid process?

We can help with that. All students applying to SouthCoast Community Foundation scholarships are invited to use the uAspire Financial Aid Help Desk to get your answers to your questions.

This service is available to all scholarship applicants from January through the beginning of May. After May 1st, access to this help desk will continue for scholarship recipients only, through the end of 2020.

uAspire is not able to answer questions specific to the actual scholarship to which you are applying.

Past Recipients – Redeem your Scholarship Awards.

Community Foundation scholarships are to be paid to a U.S. based college/ university, on your behalf, for qualified educational expenses.

To redeem your scholarship, please complete the Scholarship Redemption Form directly following your successful completion of the Fall 2020 semester. Please make sure the transcript that you upload to the redemption form includes your name, student ID number, and college/university name. Upon receipt, the Community Foundation will disburse the full payment (for single year awards) to a college/university, on your behalf. We cannot release any funds without the above information.

Note, if you received an award during or before 2020 and would like us to process your scholarship payment, please complete the fill the Scholarship Redemption Form.

When will the Scholarship application be available?
Applications are available on January 1st. Visit our website to take the scholarship eligibility quiz, the first step in the application process, and review scholarship opportunities for which you are eligible to apply.

Are Scholarships Renewable?
Not all scholarships administered by the SouthCoast Community Foundation are renewable; however, if you received a scholarship award that is renewable for one or more years, your notification letter will indicate it as such.

How do I apply for a scholarship?
Most SouthCoast Community Foundation scholarships are available on our online portal. To access our portal and apply for scholarships, you must first take the Scholarship Eligibility Quiz.

Once you’ve taken the quiz and have identified which scholarships you may apply, check the box next to each opportunity and add them to your application bin. You will then be prompted to create an account and begin your applications.

What email address should I use to create my login?
Use an email that you will check quite often. This should not be a high school email address.

What does the application process involve and what is required to apply?
Each application’s process differs. Most applications require that an applicant electronically submit a transcript, letters of recommendations, FAFSA Student Aid Report, resume, essay, and other supporting documents.

What is a FAFSA and SAR report? How do I obtain my SAR report?
The Free Application for Federal Student Aid (FAFSA) is a form that must be submitted annually by current and prospective college students (both undergraduate and graduate) in the United States to apply for federal student financial aid, such as Pell grants, Stafford loans, PLUS loans, and work-study programs. The FAFSA is also used to apply for most state and institutional financial aid.

Once the FAFSA is submitted to the U.S. Department of Education, it will be processed and a Student Aid Report will be produced. Beginning October 1st, you can start your FAFSA for the following academic year by going to the FAFSA website. Your uploaded Student Aid Report must include ALL pages of your processed report, including your full name and Expected Family Contribution number. For more information regarding the FAFSA process, please visit Studentaid.ed.gov.

If I am awarded a scholarship, how do I receive the funds and what do they cover?
Scholarship checks are sent directly to the school’s student accounts or financial aid office. Scholarship payments are made on the student’s behalf for qualified educational expenses. 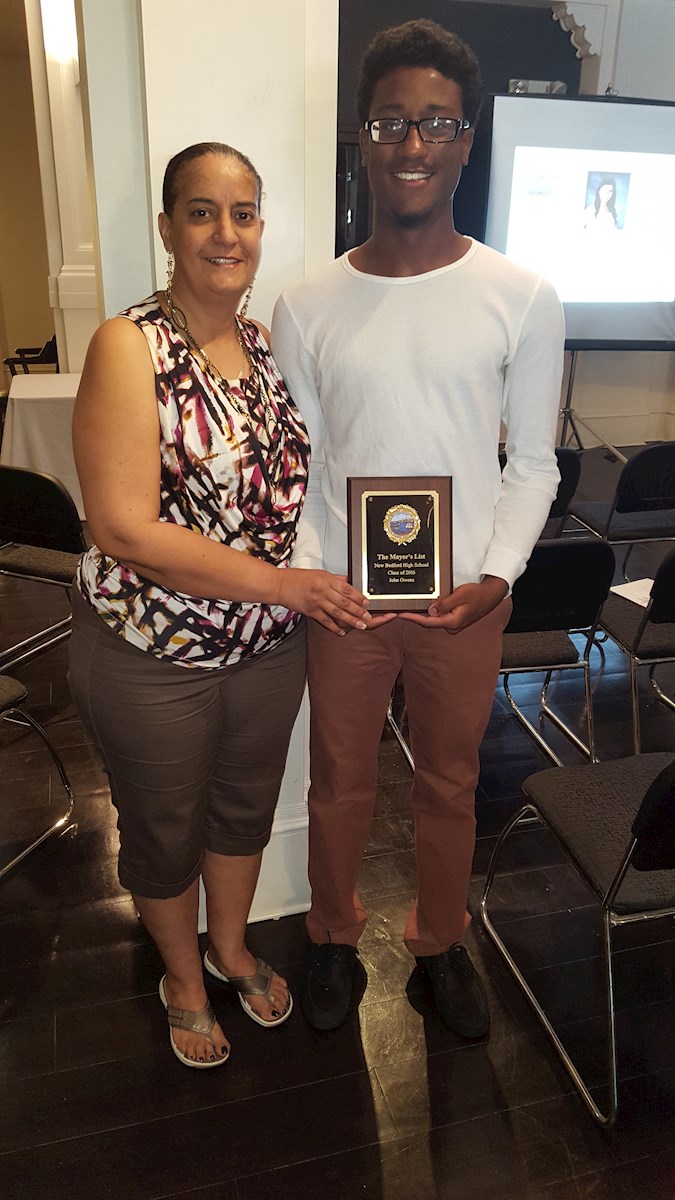 John Owens (pictured with his mom Fatima Andrade) just wants to make people’s lives easier. And if he can save the planet in the process, well that’s a good thing, too. A 2017 recipient of an award from the Albert F. Carr Scholarship Fund, John is pursuing a degree in electrical engineering at the University of Connecticut with deep interests in renewable energy and aeronautics.

A member of the National Society of Black Engineers, Engineering Ambassadors Presentation Team, and the Institute of Electrical and Electronics Engineers, John has always had a love of finding out how the products and machines in our lives work to support our needs, and his mom Fatima—herself an engineer—fed that desire in him from an early age, leading John to become a Carr Scholar.

Albert F. Carr was a New Bedford native and 1943 graduate of New Bedford High School who moved to Baltimore after graduating from the Massachusetts Institute of Technology in 1948. Although he lived in Baltimore for 57 years until his death in 2005 at age 79, Mr. Carr still spoke of Massachusetts as home and recalled his high school alma mater with great affection. Mr. Carr left a legacy that relays his fondness for his hometown and high school: a scholarship fund for New Bedford High School graduating seniors who wish to attend MIT or who will pursue an engineering degree at a four-year college or university.

Just as John credits his mom for his interest in engineering, he credits the staff at New Bedford High School’s Gear-Up program for encouraging him to apply for a Carr Scholarship which has been pivotal for him to be able to chase his dreams. “It’s very simple,” John explained, “without a scholarship from the Community Foundation and it’s Albert F. Carr Scholarship Fund, I would not be able to attend UConn. With this scholarship, I get to be in an incredible engineering program and I can focus on school, not on how the tuition bill is going to get paid.”